Once upon a time, there was a little girl called Goldilocks. Goldilocks struggled at school. Her teacher always sent her to the naughty corner because she could not sit still and could not concentrate on anything the teacher said. Goldilocks didn’t have any friends and hated school.

One day, Goldilocks ran away from school and ventured into the woods.  She discovered a small little house in the woods and without thinking of the consequences, she went inside. She made herself a sandwich, took the milk from the fridge, and made herself comfortable on the couch, where she fell asleep.

Goldilocks was woken up by the loud growl of a bear. She got such a fright, she jumped from the couch and ran straight into the door, knocking herself unconscious. When she woke up, she saw the bear sitting next to her, nursing her back with a cold cloth he placed on her head. The bear calmed Goldilocks and walked her home. He had a long conversation with her parents who decided to get Goldilocks tested for ADHD. Goldilocks was lucky that this was a friendly bear – this story could have ended badly.

Goldilocks and the Bear became good friends after that and could often be seen running together in the woods. One day they decided to enter a running event, called the CellC AfricanX Trailrun (powered by Asics), to raise awareness of ADHD and to get other children like Goldilocks tested and help to become better students.

Goldilocks and the bear arrived at Houwhoek Inn, the race village of AfricanX. They were very excited to be there. They had a mission – a message to convey – and they were there to have some fun. A yellow little tent would be their home for the next three nights. Goldilocks tied some yellow balloons to their tents so that she doesn’t go into strangers’ houses again.

Race briefing and dinner – what a feast! Lots of other very excited and also very nervous runners.

A big bad wolf raced his schoolbus with screaming and shouting kids to the start at Trails End. Happy to survive the ordeal, the kids gathered around, waiting for the race to begin. Goldilocks and The Bear were bouncing up and down.

The first 20km flew by. They raced up hills, jumped over streams, swung around trees. Faster faster, jump jump, over under, leap jump. The pace was fast and they raced hard. The Bear pushed Goldilocks when he could – he dragged her along.  And then… Kaboom!!! Goldilocks was struggling.

Over the next 18km, Goldilocks dug deep. She was dizzy and struggled with the heat. The Bear helped where he could, nursed her along. Lots of ice and motivation – Goldilocks showed she was a true fighter. Podium finish for the team in the older kids category!

Goldilocks and Bear went for it in a big way.

Nobody could miss Goldilocks next to Bear. 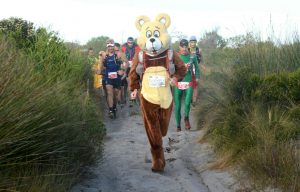 From the start, Bear just wanted to go;

Runners asked: “What are you doing, Bro?”

Bear thought his move was decisive,

it soon proved far too impulsive. 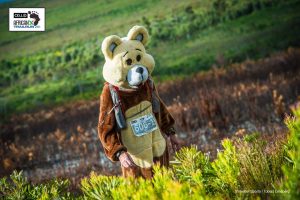 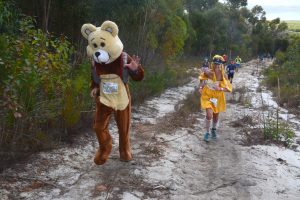 Goldilocks was strong and steady,

Bear’s head was getting heavy.

Up the hill he went so slow,

he had an almighty big blow. 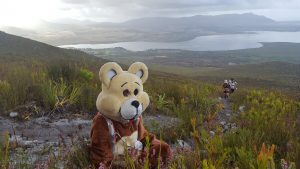 Nothing he could do to re-hydrate,

all he wanted was to hibernate,

Goldilocks had some words to inspire:

“Your efforts the kids would admire.” 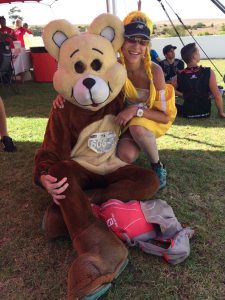 Goldilocks and the Bear made it to the end,

with a clear message they want to send.

Best dressed team of the day they won –

but the hard work has now only begun! 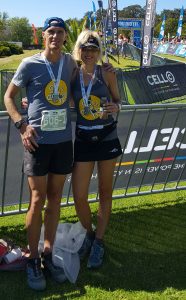 fter a windy night, Goldilocks woke up from a restless night of sleep. She woke the Bear who was still fast asleep, his ears plugged to block out the noise. She was slowly moving around. The previous day has taken its toll – Goldilocks was limping and had a terribly swollen leg.

At breakfast, she was quietly eating her peanut butter on toast, oblivious of what was going on. The Bear was trying to access, but she was in a world of her own, unfocused and distracted.  Her injury, and hundreds of other thoughts were skipping through her mind.

Dressed in their grey GB4ADHD shirts, Goldilocks and the Bear showed off their cause. The Bear had to be patient, he had to take care. Goldilocks was silently brave. He helped where he could, she fought the pain and discomfort, hiding the tears.

The weekend was a huge success.   So many kids at the race had similar stories to tell. The plight of many kids with less fortunate stories was heard. Indeed a cause that appeal to hearts.